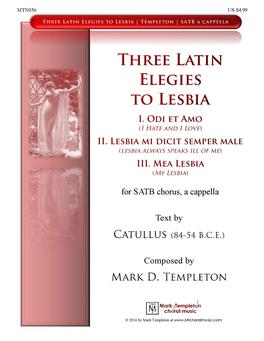 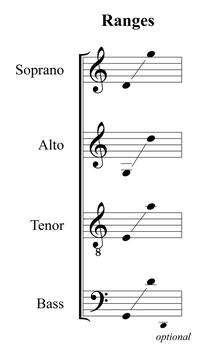 I hate and I love. Why do I do it you might ask?
I don't know, but I feel it happening and it is tearing me apart.

Lesbia always speaks ill of me, never shuts up
about me: damn me if she doesn’t love me.

What’s the sign? Because it’s the same with me: I’m continually
complaining, but damn me if I don’t love her.

No woman can say that she is truly loved
As much as my Lesbia has been loved by me.

No greater faithfulness was ever in any commitment
As was found in that of my love for you.
Three Latin Elegies to Lesbia is a setting of three poems written by the ancient Roman poet, Gaius Valerius Catullus (84-54 B.C.E.). His muse in these poems is understood to be Lesbia, the name believed to have been given by Catullus to his mistress. Lesbia was really Clodia, the sexually promiscuous wife of proconsul Quintus Caecilius Metellus Celer. Clodia was said to have many lovers, and Catullus’ torment and obsession for her is well documented in 13 of his poems where the name, Lesbia, is used. His first poem addressed to Lesbia (Catullus 51) is a free translation of a poem by the ancient Greek poet, Sappho. Scholars have suggested that Catullus chose the name, Lesbia, because of his affinity for Sappho, who it is believed was a lesbian.

Odie et Amo (Catullus 85), one of the most celebrated elegiac couplets composed by Catullus, has inspired many composers with its duality of emotions. The most well-known setting is from Carl Orff’s Catulli Carmina, part of Trionfi, the musical triptych that also includes the Carmina Burana and Trionfo di Afrodite. Unlike Orff’s driving rhythms of outwardly expressive anguish, my setting is a more introspective interpretation. It is as if the music is surrendering to the mercurial personalities that Catullus and all humans possess, the tortured ability to hate and love at the same time.

Lesbia keeps insulting me in front of her husband:
this fills the fatuous idiot with delight.
Mule, do you perceive nothing? If she shut up and ignored me
that’d show healthy indifference;…

In 92, Catullus expounds on the idea of why Lesbia insults him in front of her husband. Catullus reckons that he is always cursing her, and he loves her. She always curses him, so she must love him as well. In his desperation, Catullus uses his wit and humor to reason that his obsessive love for Lesbia is reciprocated. This setting of 92 uses incessant driving rhythms in the women’s voices to paint the words, “Lesbia mi dicit semper male nec tacet umquam de me” (Lesbia always speaks ill of me, never shuts up about me). The repeating rhythms return in the men’s voices when Catullus says he does the same, “quia sunt totidem mea: deprecor illam assidue” (…it’s the same with me: I’m continually complaining.) The piece comes to a final rest after Catullus realizes the he will always be cursed to love her.

Mea Lesbia (Catullus 87) also consists of two elegiac couplets. Catullus was only one of Lesbia’s many lovers, and he often wrote of his jealousy and disdain for her unfaithful actions. This elegy was written at a time when Lesbia had been particularly cruel toward Catullus. Despite being broken hearted, his obsession with her never waned. In his despair and desperation, he basically says, “My love for you is so great that no other woman could possibly even know what love is.” This setting of 87 returns to a more introspective nature where Catullus surrenders his love forever to Lesbia.