After finding the texts and doing all the initial research, I set out to compose music that would reflect the attitude and medieval times of Charlemagne and Alcuin.  I wanted the music as a whole to sound, more or less, as if it were improvisational. I wanted the opening bars to literally seem as if a teacher were teaching a pupil a new melody. I have the Solo 1 sing the melody followed by an antiphonal exchange (mm. 11-23) with the Solo 2.  This is followed by a round between the two parts while the 1st Sopranos hold a drone on F.  The teacher and student correlation is symbolic of the relationship between Charles and Alcuin.

The next section (mm. 32-41) signifies the robust nature of the warrior-king.  This is followed by the entrance of a more somber plainchant sounding duet (mm. 41-50) in parallel fourths juxtaposed with the robust sounding men.  It is with this juxtaposition that the two invariable personalities of the warrior-king and scholar are present.  They could exist by themselves, but, when combined, add a more cohesive strength.  The composers of the thirteenth century also used this technique of combining various chant melodies and texts together.

The next two sections (mm.51-59 and 59-69) layer the previous sections’ themes on top of each other until they build to a climactic halt at measure 69.  The compounded layers of voices and themes are symbolic of the vast political and educational expansion and influence that Charles and Alcuin had on Europe and the whole of western civilization.  After the climatic halt, the Solo 2 finishes the piece alone symbolizing the power that one voice has to influence many voices.

In an ideal situation, both Solos 1 and 2 should process slowly from the back of the performance venue while singing – almost as if strolling along or wandering.  It is highly suggested that the soloists get into the characters of teacher and student. Once they reach the front of the room they would join the ensemble in their proper choral sections.
The layout of the ensemble should have the voices of Choir 2 placed between Choirs 1 and 3.  All the men in the whole ensemble should sing during measures 32 through 59.3.  All the Sopranos and Altos should join the men from measures 41 through 50.  At measure 50, the Sopranos and Altos should split into their respective parts while all the men stay on the Choir 2 parts (make sure proper balance is achieved – the men might have to sing a bit softer).  At measure 59, everyone should be singing on his or her own part.  The Solo 2 should finish singing the song while slowly walking out by himself the same way he entered.

This piece is ultimately for 14 voice parts, but this should not intimidate the conductor because many parts are doubled.  The conductor will find that the minimalist nature of this piece makes it very accessible even if there are only two voices on each part.  I have made a ten-step rehearsal guide that lasts only 20 minutes.  The rehearsal guide does not incorporate the texts but asks the singers to only sing on a neutral vowel and consonant of the conductor’s discretion.

This rehearsal guide is only for learning the notes and the relative form of the piece.  The Latin text of this piece should not be a problem to most choirs familiar with liturgical music, but the language of the Old Low Franconian text is not well known. It may take some considerable time to learn the phonetics.  After the ten-step (20 min.) rehearsal, refer the singers to the texts and the pronunciation guide for study outside of the rehearsal.
Introduction

This piece was composed as one of the psalms of my larger work, Compline. The office of Compline, as observed in the Rule of St. Benedict (c. 480 to c. 547 C.E.), prescribes only Psalms 4, 90, and 133, but throughout the history of the church there has been some considerable variation as to how many and which psalms should be sung.  Around the ninth century, Compline, and most of the western liturgy, took on a different appearance that fused the Carolingian practices of Charlemagne with the Latin Roman rite. The most significant Carolingian change to Compline was the addition of Psalm 30 to the already established three psalms. It is not quite clear if Charlemagne himself or one of his many trusted advisers (Alcuin, Angilbert, Theodulf, etc.) decreed this change, but it certainly took place during his rule.

When I had initially started to set the psalms of Compline to music, I had only planned on using the original three, but after knowledge of Charlemagne’s suggested involvement in the addition of a fourth psalm, I decided to give Psalm 30 another look.  This knowledge sparked my interest considerably, because in 2007, I learned of a late distant cousin, Marjorie Kimball Templeton, who kept meticulous genealogical records of my family’s ancestry and had traced our lineage as far back as Charlemagne. Because of the ancestral link, I wanted to reference Charlemagne some way in my psalm settings, so I decided to look for Psalm 30 written in Charlemagne’s native tongue, Old Low Franconian.

This proved to be no easy task.  Firstly, there seemed to be some ambiguity as to whether he actually spoke that language. Secondly, Old Low Franconian is a dead language whose only representation we have exists in just a few fragmentary written sources.  But, I found in one of those fragments an old psalter written in Latin with a corresponding translation in Old Low Franconian.  Alas, I had found my “needle in a haystack.” But, this psalter only contained Psalms 18 and 53:7–73:9.  After realizing that Psalm 30 was not available, I decided to set to music Psalm 60, which is the second psalm (the other being Psalm 33) assigned to Compline for Wednesdays.

Through my research of Charlemagne, I also discovered the writings of the proverbial and endeared monk and educator, Alcuin.  I had beforehand only been familiar with a few of Alcuin’s poems (translated from Latin to English), but was unaware of his massive contribution to the court of Charlemagne and to the foundation of our western educational system.  It is for these reasons I have decided to juxtapose one of his Latin prayers, Preces Nocturnae (Prayer at Night), alongside the Old Low Franconian psalm text.

The term “Old Low Franconian” refers to the language of the Franks who lived in the “Low countries” of what is now the modern day Belgian province of East and West Flanders. This is considered to be the language of Charlemagne and his court. The written evidence for Old Low Franconian is preserved in only four documents – two handwritten manuscripts and two printed editions. All four may be traced back to a single common source, now lost, to which is commonly referred to as the Wachtendonck Codex. This Codex apparently contained a Latin version of the Book of Psalms and of several hymns and creeds with interlinear translations from the Latin into Central Franconian (Psalms 1-9) and Low Franconian (Psalms 10-150, and the creeds and hymns).

The Wachtendonck Psaltery, thought to have been written in the ninth century, survives only in a few relatively late fragmentary copies known collectively as the Old Low and Central Franconian Psalms and Glosses.  It was one of the earliest translations of the psalms into a German dialect.  The existing fragments provide the most extensive textual evidence of those early translations. Most of the surviving descriptive accounts of this text are to be found in the correspondence of Flemish scholar Justus Lipsius.  In a letter to Jan van der Does, dated 2 August 1591, Lipsius wrote he had obtained a Latin Psalter from Arnoldus Wachtendonck in Liege.  He described this as containing word-for-word “Germanic” translations “from our earlier language,” and that he intended either to have it reproduced or to copy some passages from it himself.  He also mentioned that the psaltery had earlier been in St. Amor, and it had probably been written around the time of Charlemagne (747-814). 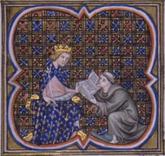 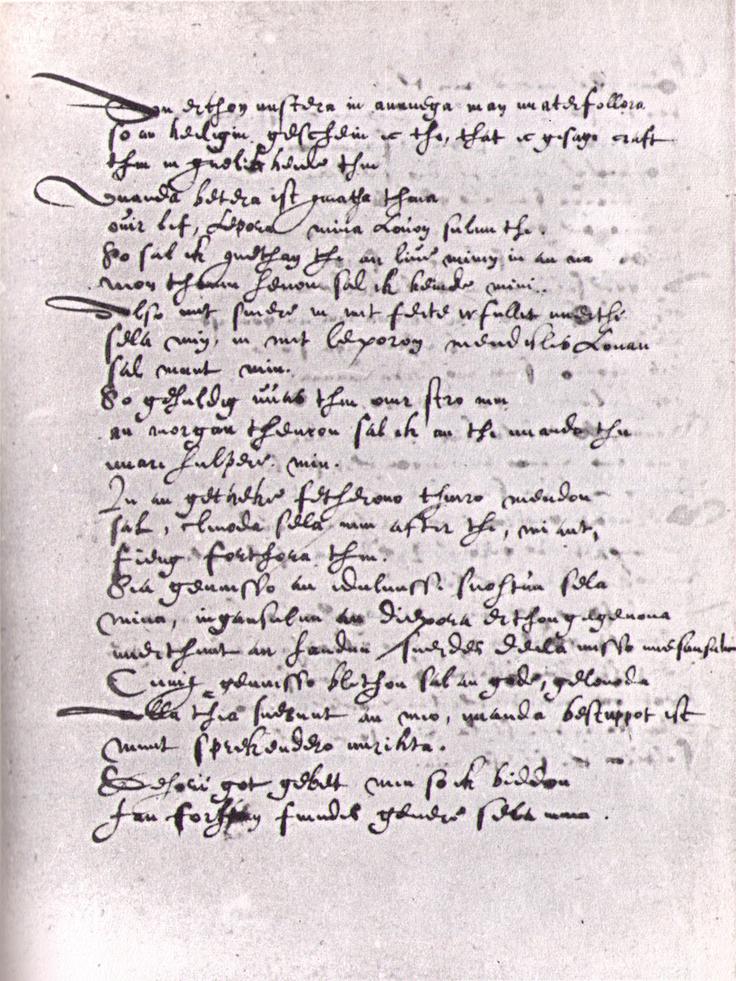 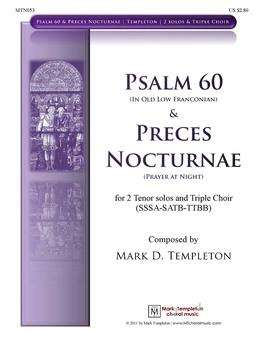 One of the fragmentary sources that has survived is known as the Dietz Manuscripts.  This source only contains, as previously mentioned, Psalms 53:7–73:9.  It is presumed that the Dietz Manuscripts were copied from an original lost source (the Wachtendonck Codex) between the years 1595 and 1605. The text (Psalm 60) in the music score comes from this source.

Alcuin’s Latin prayer, Preces Nocturnae (Prayer at Night), comes to us with no mystery at all. His correspondences and writings have been well documented and published over the ages.  This particular prayer is well suited for Compline, and bears a striking resemblance to the Salva Nos antiphon.  The only difference is when Alcuin prays “Conserva requiem mitis ab hoste meam” (Guard thou my sleep against the enemy), he was truly praying for protection from barbarian hoards marauding upon Frankish lands.

Charlemagne (Charles the Great) was born heir to the Frankish throne in 747 C.E.  When his father, Pepin the Short (714-768), died, Charles ruled his inherited land with a wise and unyielding leadership that Europe and the western world has not seen since.  It was his personality and character, which can best be surmised as culturally-hungry, which led to his success and the almost legendary persona that we imagine today.  Wilson, in his biography of Charlemagne, describes Charles as having “a deep and genuine love of learning for its own sake and an almost adulatory appreciation of those who had mastered the mysteries of ancient wisdom.”

Alcuin, born 735 in York, England, has been considered one of the greatest of a distinguishable line of clerical schoolmasters.  In 778 he had established one of the finest libraries in all of Europe and was vastly gaining an international reputation for his work in education.  In 781, Charles invited Alcuin to be the head of the Palace School at Aachen. Alcuin reluctantly accepted to teach a king and his kingdom. Charles would sit at Alcuin’s feet and learn to speak and pray in Latin.  Charles even learned to read Greek but could not pronounce it.  Einhard, Charles’ contemporary biographer, paints a picture of the aging great king with tablets and pencils under his pillow in order to practice his letters before sleep, but he never did fully master the art of writing.

Together, Charles and Alcuin founded a plethora of cathedral, monastic, and parish schools which instructed in the seven liberal arts of grammar, logic, rhetoric, arithmetic, geometry, music, and astronomy.  Their newly founded scriptoriums were dedicated to the copying and dissemination of as many manuscripts as they could find. It is possible that the Wachtendonck Codex was written under decree of Charles himself, so as to have a psaltery written in his own language, and it is also possible that Alcuin and his fellow scholars were the scribes.  It is in the unbridled spirit of learning and thirst for knowledge that both Charles and Alcuin possessed that I have composed this piece.