Papua
I am extremely fortunate to work at a boarding school where I teach high school students from all around the world. They come to get an education, but most of the time I end up learning more from them. I am so grateful to have been given the opportunity to work with a group of students from Papua, Indonesia. Papua is a large island in the south Pacific just north of Australia. The land is filled with dense forests, jungles, mountains, and of course, beautiful beaches. Most of the people who live there are indigenous, and they continue to maintain their way of life that has been around for many thousands of years. They are a proud and happy people full of vigor and culture. These students were given the opportunity to come to America to receive an education. They all love to sing, so I jumped at the chance to learn their songs most of which have never been written down or sung outside of their own tribes. I decided to record and make a collection of their songs for choirs around the world to sing and enjoy.

Paniai Maki is a traditional song that comes from the Paniai region of Papua. This region is well known for its three lakes. Paniai Lake (the largest), Tigi Lake, and Tage Lake are named in the first line of the song followed by Kamu, a vast valley surrounded by mountains on all sides. Mapiya is an area with steep mountains and deep, fast-flowing rivers. The three lakes are spectacularly high in the mountains at an altitude of 1650 to 1750 meters. These lakes and the surrounding mountain forests have sustained the indigenous people living there for thousands of years. The song, Pania Maki, tells of the beauty of the mountains and lakes and equates the people with this beauty too.

Unfortunately, during the late 20th century, European and American businesses began to mine the mountains for precious metals, and the Indonesian military set fire to the surrounding forests so they could not harbor separatists. This combination of man’s greed and power indirectly caused the sediment to loosen and, in 2011, triggered massive flooding four meters high in the surrounding villages. It is my hope that this song will help bring awareness to the plight of the indigenous people of Paniai, so that their way of life and their environment can be sustained.
I was introduced to this song by my student, Elvine, who is from the Ekari tribe in the Paniai region. The language they speak is called Ekagi. Elvine sang this song to me with her sweet soprano voice perfectly in tune. The lilting and syncopated vocal parts along with the relaxed drum rhythms make this a perfect example of Papuan music. The ranges are conservative making the song accessible for any choir. There is an English translation written underneath the Ekagi language in the score. It can be performed in either language. It is ideal to sing the Ekagi the first time through and then English the second time through. 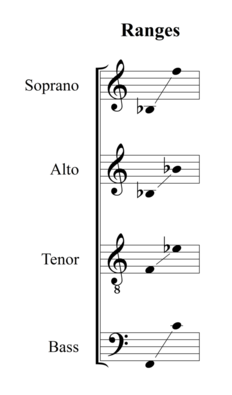 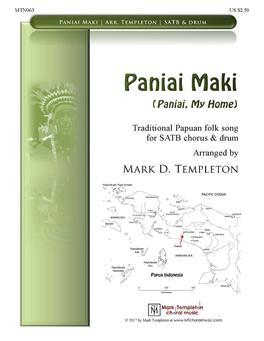 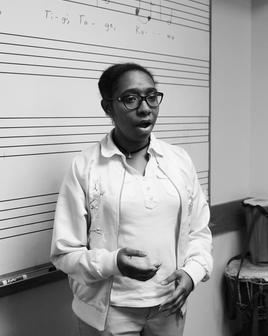