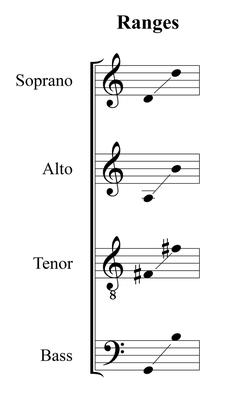 Papua
I am extremely fortunate to work at a boarding school where I teach high school students from all around the world. They come to get an education, but most of the time I end up learning more from them. I am so grateful to have been given the opportunity to work with a group of students from Papua Indonesia. Papua is a large island in the south Pacific just north of Australia. The land is filled with dense forests, jungles, mountains, and of course, beautiful beaches. Most of the people who live there are indigenous, and they continue to maintain their way of life that has been around for a millennia. They are a proud and happy people full of vigor and culture. These students were given the opportunity to come to America to receive an education. They all love to sing, so I jumped at the chance to learn their songs most of which have never been written down or sung outside of their own tribes. I decided to record and make a collection of their songs for choirs around the world to sing and enjoy. Nuru Ai Pani is the first of these songs.

Nuru Ai Pani is a traditional song of the Kamoro people, the biggest tribe in Timika, Papua Indonesia. Only about 8,000 people speak the Kamoro language. The song tells about the longing of a child for her parents who are often gone working every day to find fish and sago [1] to feed their family. The child misses them but understands why they must be away. This endears the parents to the child as she expresses her love for them.

I was introduced to this song by my Papuan student, Marike, who belongs to the Kamoro tribe. She has personally lived this song. She described how her father would not have enough money for food, and he would have to work to get fish, deer, birds, and even bats to feed his family. They lived a life dependent on nature – a life without money or technology. Singing this song was extremely emotional for her because the feelings she was experiencing as a student in a faraway land without her parents brought back memories of the love she felt as a child when she first learned the song. Nuru Ai Pani is by far the most well-known traditional song among the Kamoro people. This speaks to the strong family ties and social values that they hold dear. It was truly an honor for me to work with Marike on this song. 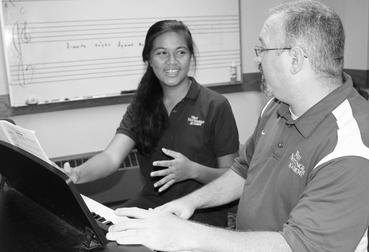 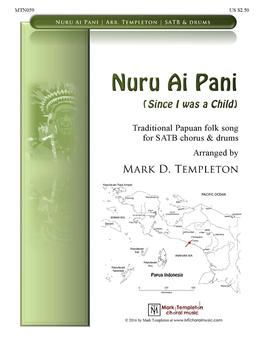 Many Kamoro people live by the sea, so I decided to incorporate an island vibe into this arrangement. The ranges are conservative making this arrangement accessible for any choir. There is an English translation written underneath the Kamoro language in the score. It can be performed in either language. A score for two drums is also available on the last page. One drum should be larger and the other smaller. Vowels are pronounced similar to Latin vowels except not as tall. The diphthong, “ai,” is pronounced the same as in the English word, “hi.” All consonants are pronounced the same as Latin with the exception to the “t.” The “t” should be pronounced with the tongue touching the back of the teeth instead of the roof of the mouth. The “r” is always rolled.
[1] Sago is a type of tree that provides flour for a host of staple foods that Papuans eat: papeda (sago flour mixed with water), ulat sagu (sago worms – served like kabobs), sagu bakor (sago bread). It is eaten at every meal – much like rice is a staple food for most Indonesians.

(Since I was a Child) for SATB chorus & drums