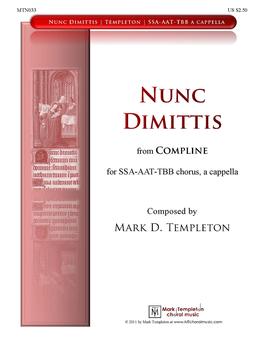 for SSA-AAT-TBB chorus, a cappella

The text for the Nunc Dimittis is taken from Luke 2:20-32 of the Latin Vulgate and is commonly referred to as the Canticle of Simeon. In the Roman rite, the Canticle is sung at Candlemas (“Candle Mass”) and during the concluding office of the day, the office of Compline. It is also sung along with the Magnificat (the Canticle of Mary), usually in English, during evensong in the Anglican tradition. The text has been famously set to music by many composers. Influenced by chant, renaissance composers, like Josquin, Byrd, and Victoria, have written some of the most beautiful polyphonic settings.  My setting, from my larger work, Compline, juxtaposes the same renaissance techniques of imitation and polyphonic writing with a unique and modern harmonic sound. It is my humble attempt to pay homage to the most inspirational of renaissance composers, Palestrina.

My Nunc Dimittis is written for nine parts and divided into three groups: the first group, S1, S2, A1, the second group, A2, A3, T1, and the third group, T2, B1, B3. Each group should be placed according to the performance suggestions found at the bottom of the page. The piece incorporates an incipit (intoning chant) at the beginning of each section and is loosely adapted from the Nunc Dimittis at Candlemas which can be found in the score. Regardless of differing performance practices, the diamond shaped notes in the incipit should be sung slightly faster than the round notes. While the stylistic techniques of this piece are imitative and chant-like, the form is a bit minimalistic. There are four sections (Nunc, Quia, Lumen, and Gloria), and each time a new section begins, after the incipit, another vocal part is added to each group. The same melodic and harmonic material is present in each section until the Gloria, where all the parts are singing the main theme in unison. The piece concludes with a final Amen that is sure to bring utter delight to your choir.