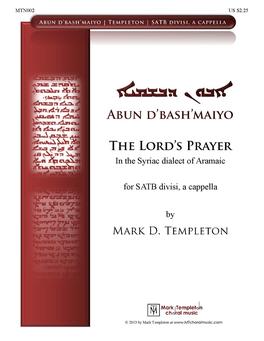 (The Lord's Prayer in Aramaic) for SATB  divisi chorus, a cappella 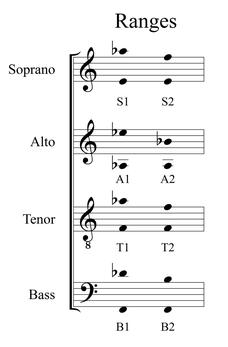 Since the dawn of the first century, the text from the gospel of Matthew 6:9-13, known as the Lord's Prayer, has inspired many musicians across the globe from Palestrina to Schubert to Durufle and countless modern composers. The vast collections of Western plainchant and Byzantine chant also include the Lord's Prayer in their repertoire. Probably the most unheralded version comes from the Beth Gazo, a collection of liturgical chants and hymns of the Eastern Syriac Orthodox Church. The Beth Gazo (The Treasury of Chants) is the Eastern Church's equivalent of the Liber Usualis of the Roman rite. The roots of the collection can be traced as far back as the second century with Ephrem the Syriac contributing the bulk of the chants. It is supposed that thousands of the chants existed in the original collection, but since they were only passed down through an oral tradition, only 700 or so have survived. Only in the late twentieth century have musicologists begun to preserve these in musical notation. The Abun d'bash'maiyo (Our Father) is one such chant that has survived.
​When I set out to compose the Lord's Prayer for my Compline, I wanted to try somethings different. I searched until I came across this version from the Peshitta text in Syriac, one of the dialects of old Aramaic. Historians and biblical scholars generally agree that Jesus would have spoken Aramaic. I thought it would be wonderful to compose something using the language, or near language, of Christ. I decided to use the actual chant from the Beth Gazo as my melody. The melody uses the Arabic maqam, Nahawand, which is basically a melodic minor scale found so prevalently in music from the Fertile Crescent. The chant is sung like a hymn with four verses repeating the same melody. The only words that are not traditionally used as part of the chant is the title, Abun d'bash'maiyo. I set these words as a kind on intoning chant before each verse with the last intonation using the full divisi and power of the choir. This meditative and somewhat surreal setting is well suited for any sacred service or for a multi-cultural concert.